Sozennittamachi of the neighboring village (currently Somomi Town) merges. It will be Tsuchizaki port town. 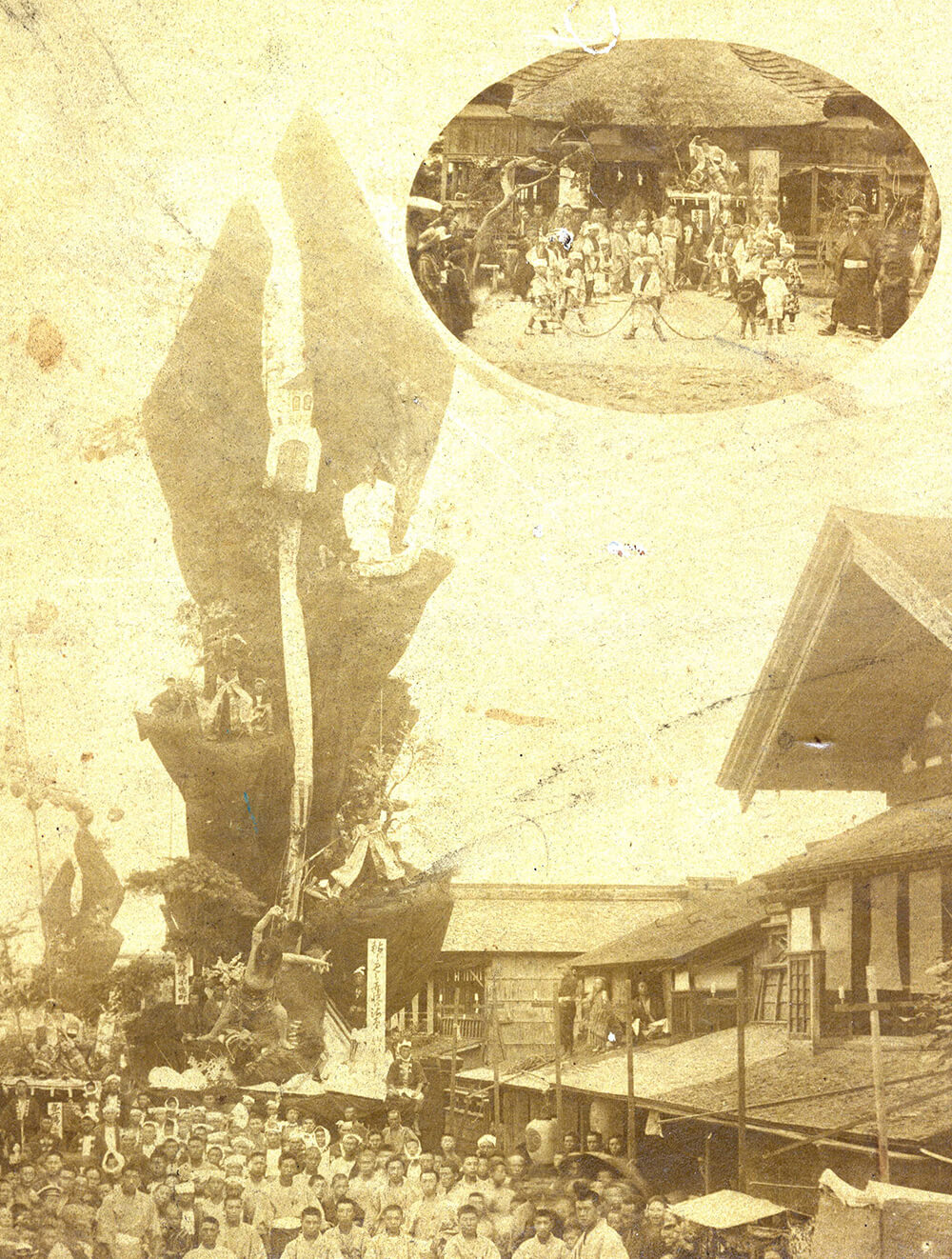 Foreign subject／Ayu and you are both strange

A row of Hikiyama when competing for height. I can see a hikiyama of a similar height behind. At the same time, it seems that kids hikiyama was being pulled. The height can be seen as seven lengths (21 m).

An electric wire is drawn at Tsuchizaki. Along with this restrictions on driving, Hikiyama gradually became lower, it is said to be about 5 meters now. 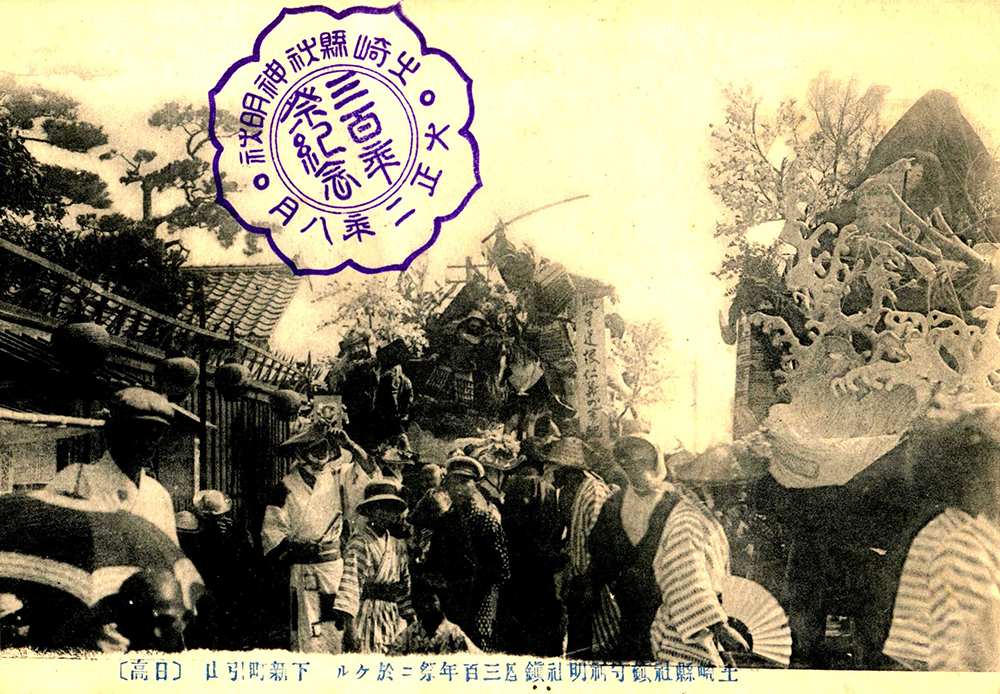 “Hikiyama for showing you =Okiyama.
In the past, this fixed placement that did not pull this way was made actively.
The photo is said to be the longest mountain that can be checked at the moment. The left and right edges are broken, but both ends are thought to continue further.” 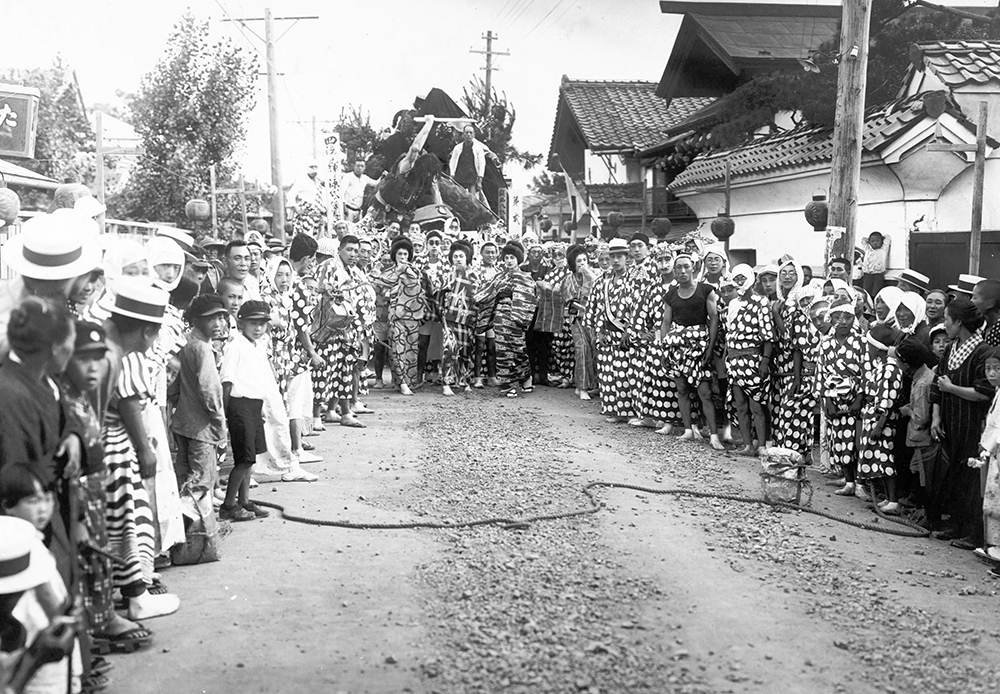 Picture of the first dance (harbor koto) danced in the festival. It was said that it was popular enough that there are no spectators in other hikiyama, and since then, dancing has become indispensable to the festival. Four people in kimono in the center of the picture are female dressed young people.

The festival is canceled by the Pacific War.

The festival is resumed. There is no US military permission to use the doll’s sword or spear, and it becomes a fist doll.

“Minato Hikiyama Kuruma Ondo” is composed, and the choreography of dancing can also be attached.

“Onshinkai” will be formed for the preservation of sound prefetching / swinging style. 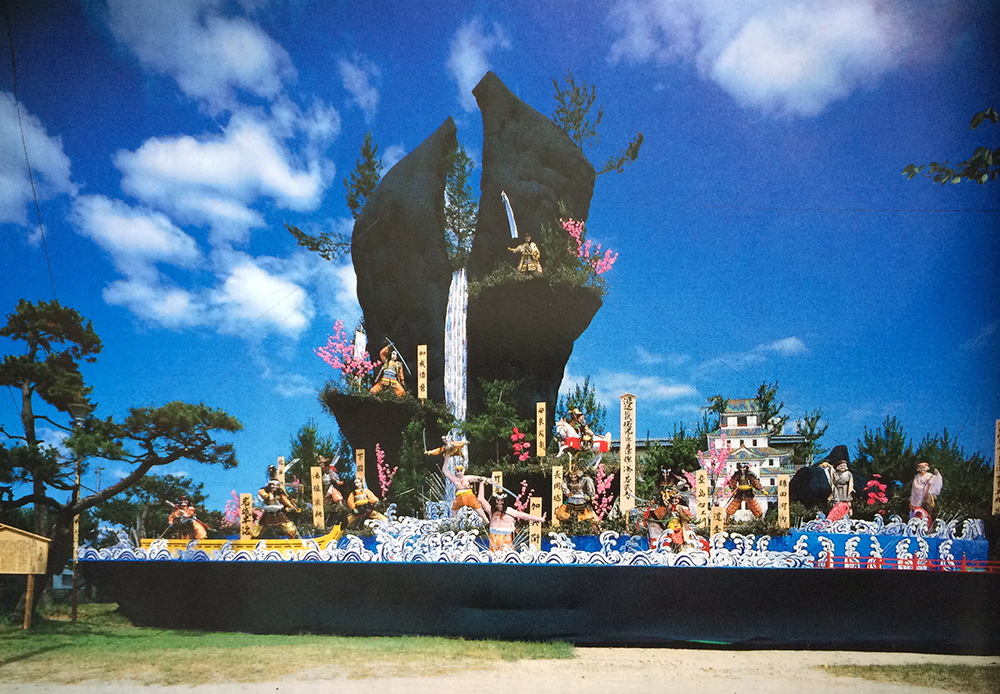 Okiyama with a height of 23 meters decorated in Tsuchizaki station front child park.

On December 15th, it will be designated as the important intangible folk cultural asset of the country which will be the tenth in the prefecture.

With the road extension work of Tsuchizaki station development developed, the festival hall and hall of Tsuchizaki Shinmei Company will be rebuilt. From this year, on July 20, a worship service with Hikiyama in the precincts begins “a visit to a village”.

On 12th September, the Akita-shi Tsuzaki Games were held at the National Association of Yamaha, Hokkaido and Yatai Sushi Confederations, and 10 Hikiyama dedicated. It is a village company street, “Restoration Hikiyama” of 15 m in height is shown and operated.

Tsubaki Shinmeisya’s 400 year anniversary. 25 Higashiyama volunteers dedicated to the greatest number after the war. “Restoration hikiyama” of 15 m in height is shown and operated. 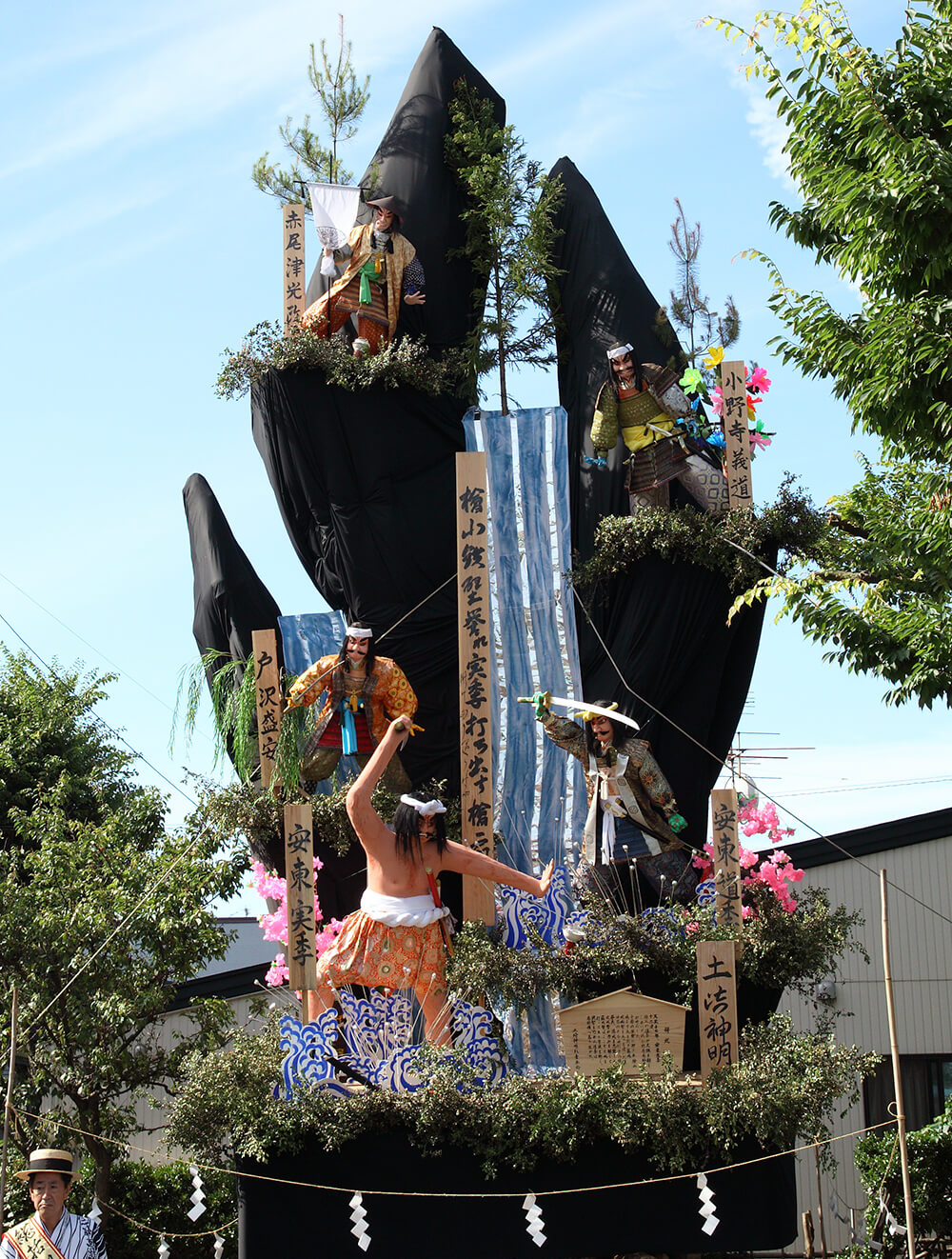 Restoration hikiyama reproducing the hikiyama at the time of height competition at Tsingzaki Shinmei company’s 400 year festival. It is approximately 15 meters high.

History of the festival to know from the literature

“A record of the founding of the festival
People in the town asked the shrine magistrate to do a shrine mikoshi passing cruise from the next honorific year 2 (1705) because seafarers coming to Tsuchizaki port donated the shrine for the first year of Hohenaga (1704).”

“Records of local journals in the prefecture
About the doctrine of Tsuchizaki Shinmei Company, there is a state that the “”Saki Festival”” and “”Pontile Shrine Shrine”” which are no longer being done have been done.”

“Description of the festival in the eyes of a foreigner
“”We went to the place where the throng was greatest, round the two great matsuri cars, whose colossal erections we had seen far off. These were structures of heavy beams, thirty feet long, with eight huge, solid wheels. … and two special peaks of unequal height at the top, the whole being nearly fifty feet from the ground. All these projections were covered with black cotton cloth, from which branches of pines protruded. In the middle three small wheels, one above another, over which striped white cotton was rolling perpetually, represented a waterfall ; at the bottom another arrangement of white cotton represented a river, and an arrangement of blue cotton, fitfully agitated by a pair of bellows below, represented the sea. … These two cars were being drawn up and down the street at the rate of a mile in three hours by 200 men each, numbers of men with levers assisting the heavy wheels out of the mud-holes.”””

“I can know the bustle of the festival at that time
“”Today’s night Tsazaki Ise festival Yukonomiya Focusing on the light heaven of the lanterns Even if you would like to see better than outside of mathematics people like Minato Day 21 next day festival line, mountain shelf, stalls, takeout, pasture It has spectacular eyes in the clan, it is a gift stall to the people of the house rather than to the merchants of the prefecture, it is a place to climb up to the far end and to stand a cone. “”
※ quoted from “”Hitomi Shikyu 4th Book Akita Sakigake Report 4″””

“A record that can be known to the attention of people of those days as to the festival and bustling
“”Satsuki shrine festival of Tsukasaki Shinmei Festival at Tsuchiurasaki Shrine festival in Akita County, Sankoin Seminar, Shinkyoin, Shinkin Toshiba, a sacred ceremony with a light of the evening festival. On this day the shrine to the shrine town of Kinbocho, Kamiyuki, I will leave with a few more towns than the cities, and the cities compete with each other to be able to compete in tactics, leaving as many people as possible to those who do not know. “”
※ quoted from “”Akita Sugin (3)”””