Rooted in the region of
The management system for the festival

The Hikiyama Parades of Tsuchizaki Shinmeisha Festival is engaged not only in the shrine officials but also in the communities and affiliated organizations, as a festival of history and traditional areas. Currently, the operation and management of celebrations are being conducted with the guidance and cooperation of each related administrative agency under the operating system as shown in the figure below.

The stakeholders in each town related to Hikiyama operation are placing a sash from the shoulder, and in addition to the witness that it is a member of each town, this role is shown in each hall. The color of the border of sash is unified within the whole town for each role, and you can confirm the role of that person by checking sash. 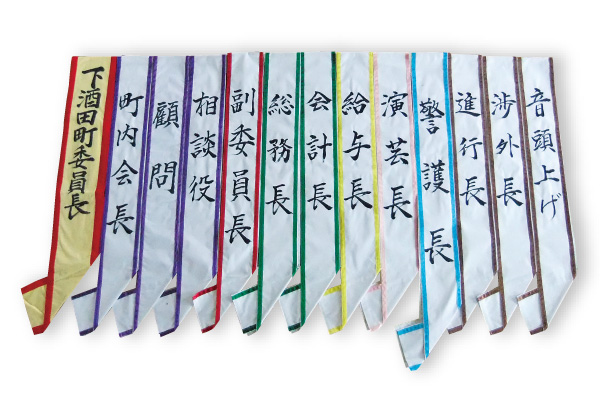 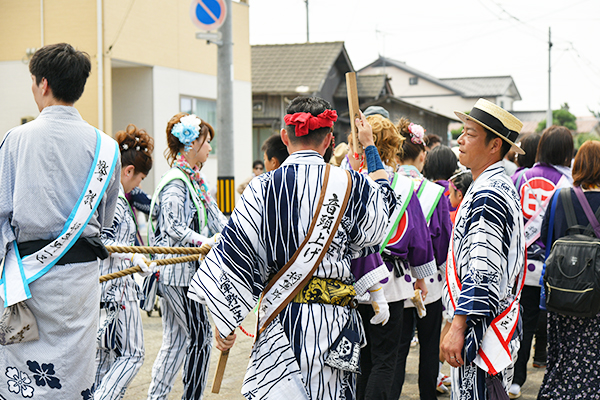 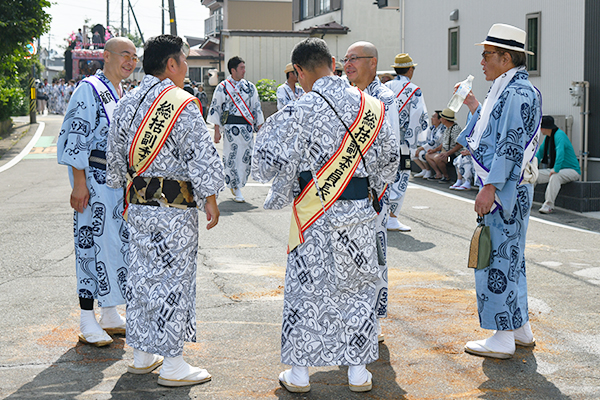 Chief executive of Hikiyama in the town. For those living in Tsuchizaki, it is a great honor to serve as committee chairman in his life.

They have a role of supporting committee chairman. Although they are elected some people in the regulations, in most cases, a couple of people will be appointed.

They will support the entire Hikiyama event and arrange for each role to be executed smoothly. There are some towns that take “donation collection” and “money transfer” as “general affairs”.

Account management. Besides this, when Hikiyama in your town goes through other towns, there are also cases where donations are collected from each household in the vicinity.

They are looking at the whole to ensure that Hikiyama operates safely, and a staff conducting thorough safety measures so that towers and audiences do not match accidents.

Based on the operation plan submitted in advance, they make Hikiyama operate on time. Depending on the town, there are also places where it is a matter of negotiation.

When Hikiyama intersects another one, they negotiate which is going ahead etc. They go ahead of Hikiyama operation and negotiate with other towns.

Hikiyama moves with a signal of “Ondo age” which the caller sing. Besides they are a trigger for Hikiyama operation, they are responsible for safe operation with Furikata and Yaritsuki, such as changing course and turning direction.

They adjust the speed of the Hikiyama and the direction of travel by putting a long wooden rod (Furibo) on the wheel so that Hikiyama is safe and smooth operation.

They show off the dancing mainly of Akita folk songs. In recent years women account for the majority. Especially Akita Ondo is a dance performed by many towns.

Mainly during the ceremony, they supply meals and drinks etc. From the Hikiyama departure and leaving behind the rush to prepare.

The Ohayashi music played during the festival is called “Minatobayashi”, and is ranked as one of the Three Greatest Festival Music of Akita, alongside the “Oyama Bayashi” of Kakunodate, Senboku City and “Hanawa Bayashi” of Hanawa, Kazuno City. 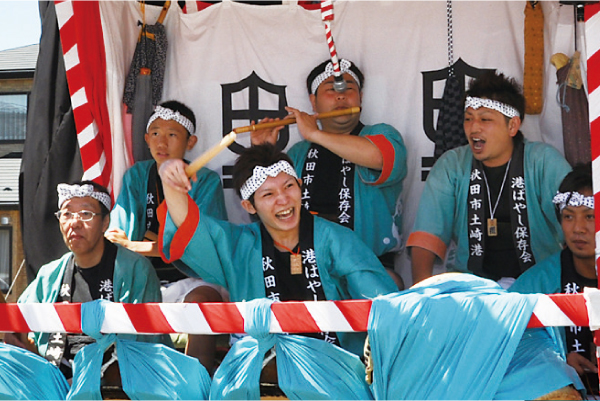 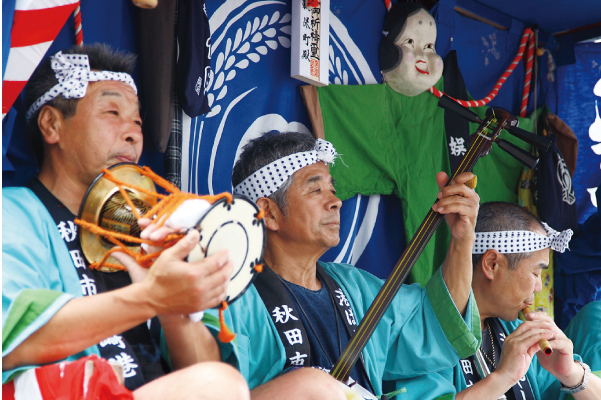 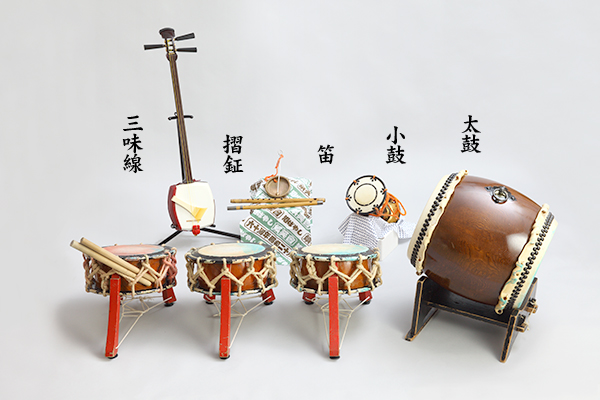 Until Would warⅡ, Minatobayashi was handed down as Iemoto system or hereditary, but after the war, the four organizations were established to preserve and inherit the traditional folk performing arts.They called Kowakai, Gosyokai, Shibukikai, and Wakanamikai.They play the accompaniment by receiving requests from each town.

Opinions differ as to how the Minato Bayashi originated. One theory is that the old hometown (now Hitachiota City, Ibaraki Prefecture) of Yoshinobu Satake, who was relocated to Akita by the Tokugawa Shogunate after the Battle of Sekigahara, had a Tenjin Bayashi, a festival music which in part is very similar to the Minato Bayashi. It is said that people who moved to Akita along with the Satakes brought their arts and culture to Akita, which were then combined with the original local arts and culture of Akita to create what is now known as “Minatobayashi”.

The Tsuchizaki Minatobayashi actually contains five separate tunes: “gathering drums”, “Minato Bayashi”, “Aiyabushi,” “Minato Sword Bayashi”, and “Kaso Bayashi”. In olden times, there were two other tunes, “Tanzen Bayashi” and “Yukata Bayashi”, which died out over the years from the late Meiji period to the Taiho period. The ohayashi tunes are mainly divided into the “gathering drums” that are played when seeing off a departing hikiyama or portable shrine, and other tunes that are mainly marching music to cheer the hikiyama parade. It is fascinating to see how each tune perfectly fits the situation and atmosphere where it is played.

Opinions differ as to how the Minato Bayashi originated. One theory is that the old hometown (now Hitachiota City, Ibaraki Prefecture) of Yoshinobu Satake, who was relocated to Akita by the Tokugawa Shogunate after the Battle of Sekigahara, had a Tenjin Bayashi, a festival music which in part is very similar to the Minato Bayashi. It is said that people who moved to Akita along with the Satakes brought their arts and culture to Akita, which were then combined with the original local arts and culture of Akita to create what is now known as “Minatobayashi”.

On July 21, it is played at the time of Miku Hikiyama. Just like the waves of the Sea of ​​Japan that return, it is brave and brilliant, tells the honest feeling of the harbor. A song also called “Hon Bayashi”.

On July 21, it will be played at the Modoriyama. It is thought that originated from the songs of Bon Odori and originated from the “Hirebushi” which has been transmitted in various ways to the whole country. A song suitable for the final stage of the sorrowful festival.

On July 21, it is played at the time of Miyukiyama. It features a rhythmic tempo, which was temporarily stopped in the middle Taisho era, but was restored and restored in 1945.

On July 21, it is played at the time of Myukiyama. In the Meiji 22, it was created when Sozen Nita village of the neighboring village entered the port of Tsuchizaki Harbor, and was named “Kasei” because “A phase change is added”. It was temporarily stopped, but it was restored and restored in 1951.

Ondotori is a leader who gives signs to depart and stop Hikiyama. Hitting the rhythm and issuing various signs. When he begins to beat the rhythm and tells the departure of Hikiyama, participants have a rope, and at the same time the head begins “Ondoage”. For example, when departing, participants answer “Hara Yo Yana” (lower voice) against Ongoage (upper voice) “Dotoko Dotose”. There are various kinds according to the scene in raising the notehead. When Hikiyama does not move easily, it sometimes uses different songs depending on the situation of the festival, such as saying “If you do not go and ask the gods”, singing may be arranged by improvisation.

Furikata refers to people who are responsible for heading and swinging sticks, but they are also referred to as Furikata, which refer only to the staff who merely plays the swing stick (In this case, Furikata is about the clerk who plays the swing stick). They are attached to one wheel one by one as a function to adjust the speed and direction of Hikiyama according to the direction of heading and movement of the participants. A long wooden stick (Furibo) made of falseacacia, cherry blossoms, Nara, etc is applied to the transportation, and four people skillfully control Hikiyama while breathing. The swing sticks are made by angle cutting, crushing, brooming, and the length and type of trees vary according to the user. Also, it is the work of Furikata that adjusts the movement by moving oil to Hikiyama car import, oil adds white oil etc. to diesel oil, mix with original formulation and use each. Besides, they responsible for the work related to the rope, such as the work of Yaridashi that wraps the hook stick around the “spear” and the adjustment of the length of the tow line.

Add a flower with the dance of the town boast
Engei

“””Engei”” (entertainment performances) given along the hikiyama parade are one of the festival’s highlights. It is believed that such engei performances during a hikiyama parade originated from the performance given by men from Shinmachi dressed as women in 1931.
In recent years, engei performances are mostly led by women, often accompanied with circular dancing by children, and both float pullers and audience love these performances. Many neighborhoods choose “”Akita Ondo””, a well-known traditional song of Akita, as the theme of their engei. The combination of hand dancing, hanagasa (flowered sedge hat) dancing and group dancing is fascinating to watch. Some neighborhoods choose more Tsuchizaki-related tunes such as “”Minato Kouta”” or “”Minato Hikiyama Ondo””.”